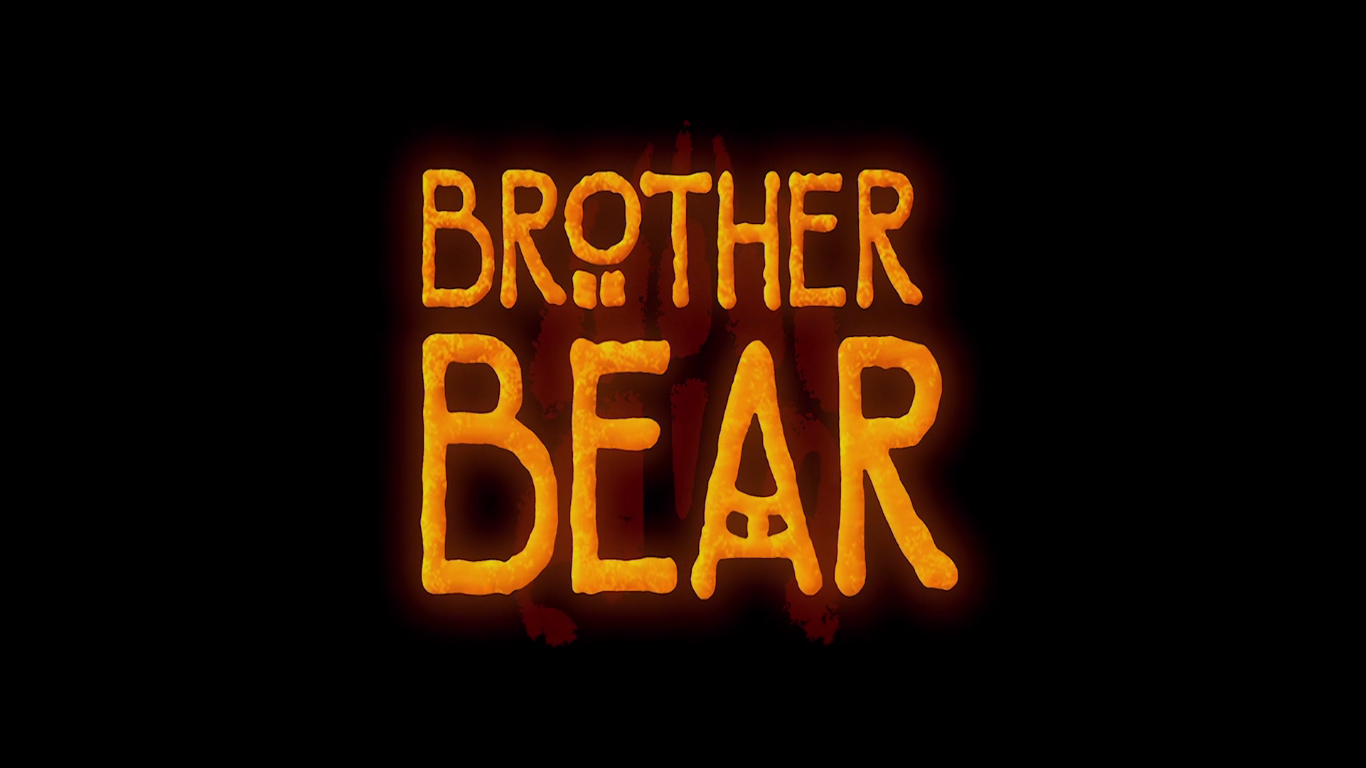 After the enormous disappointment of Treasure Planet, Disney desperately needed a hit, something to remind audiences who they were, what they were capable of and that their era of creativity didn’t end with the Renaissance; unfortunately, all they offer was Brother Bear. Though significantly more commercially successful than Treasure Planet, Brother Bear received an even more savage critical reception, dismissed for its lacklustre story and tendency to copy other, more successful Disney films. Though largely remembered as a bit of a joke today, Brother Bear is not a film without merit, as it does have a few good points.

The first thing to note about the visual style of the movie is that it changes about twenty-five minutes in – the first act of the movie is smaller in scale, with less complex environments, muted colours, rounded, but relatively simple character designs similar to those of the human characters in Lilo & Stitch and a more relaxed, realistic use of animation. However, once Kenai is transformed into a bear, the film shifts into anamorphic widescreen, looking much wider and grander, with very bright colours, sweeping, detailed environments and much livelier, more personable designs for the animal characters; I must say, this is an interesting move which makes sense within the context of the story and helps to show off just how much effort was put into the visuals. The colours are the film’s greatest asset, they are so vibrant and rich they practically leap off the screen and when combined with the detailed character designs and wonderful backgrounds, they make a picture that’s more than easy on the eyes. Though computer animation is present, it’s thankfully not as omnipresent as it was in Treasure Planet and much more focus is placed on the beautiful hand drawn characters and environments; Brother Bear might not do anything experimental or revolutionary with its animation, but it’s hard to deny how good it looks. 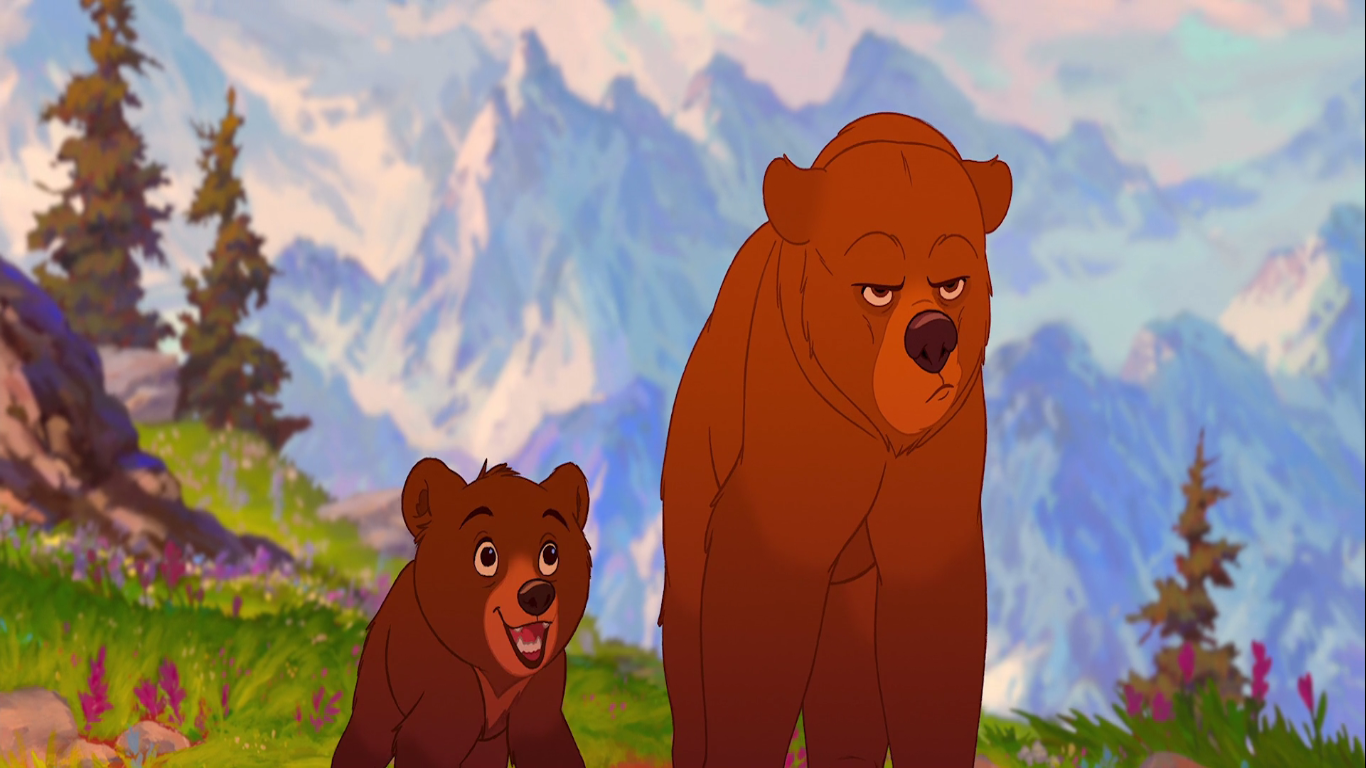 An appropriate response to being with this kid, to be honest

The story is regrettably a little lacking in comparison, especially in terms of novelty; it is effectively the story of The Emperor’s New Groove, but played seriously, rather than for comedy – an irresponsible and flawed young man learns the value of love, patience and companionship after he is transformed into an animal and forced to befriend those that he previously looked down upon, shaking his preconceived notions about the world. Additionally, the idea of nature being interconnected and everything being part of the Circle of Life has been addressed before in Pocahontas and The Lion King, as has the examination of life in nature from a different perspective and the possibility that it might be man who is the true monster, in Bambi. Most of the film’s story borrows far too liberally from previous Disney movies and it doesn’t tackle any of these ideas differently or better enough to really warrant this. It doesn’t do so with nearly the same level of delicacy or maturity either, showing nature as a perfect wonderland where all animals get along and have a good time, where bears can be friends with chipmunks and man is the only enemy, in stark contrast to the harshly realistic depiction of the natural world in Bambi; Brother Bear is too childish and unrealistic in its delivery to incorporate such complex ideas.

Other than that, the narrative is rather flimsy and uneventful, it’s just a long walk from one spot to another, like in Dinosaur (yet another earlier Disney movie it takes from) and just like in that movie, very little actually happens to our heroes along the way, so the film is full of long, boring segments with no real action. This would be forgivable if the movie took these long, quiet segments as opportunities to develop the relationship between the main characters but, as I’ll address more later, they don’t really do this either; the writers don’t really seem like they knew what they wanted to do, it seems that they had a good idea for the beginning and ending of the movie, but had no idea how to fill the middle, so just stretched a couple of scenes out for as long as they could.  Even when the film does get going and give us meaningful interactions between the characters, they can often be a little schmaltzy and overemotional; to be honest, we have seen much worse from Disney, but Brother Bear’s writing is too uninspired and its themes too obvious. 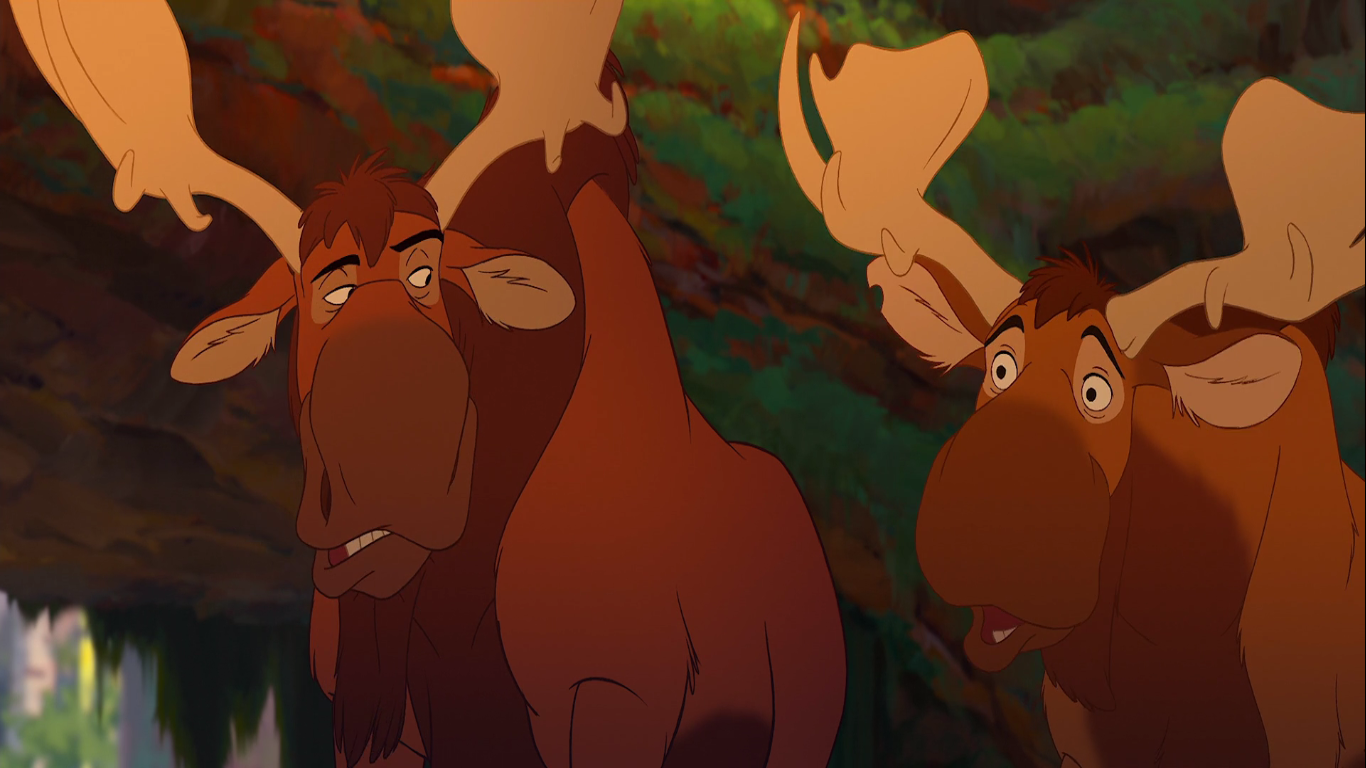 With such a thin plot, this is the kind of movie that depends heavily on its characters to keep things entertaining, but the cast here is just as thin as the story which surrounds them. Kenai does have a bit more personality than some Disney protagonists, but this doesn’t make him especially likeable; the central arc of the movie is his development from an arrogant and stubborn boy who unfairly hates bears into a more mature and understanding man who realises that all living things deserve our respect and kindness. Though a perfectly reasonable concept for a central character, this means that, prior to this change in perspective, Kenai unfortunately spends a lot of the movie as a grumpy, unfriendly killjoy and since this isn’t a comedy, it can’t be over exaggerated and played for laughs in the same way that Kuzco’s personality can, meaning that for much of the movie, Kenai isn’t easy to warm up to, a big problem for a film that is so centred around its main character. Koda is annoying, granted he is supposed to be, but that doesn’t make him any less annoying; he’s a lazy child character, hyperactive, chatty, overly cutesy, there just really isn’t any substance to his character whatsoever. Koda exists purely as a plot device to guide Kenai to the mountain and, ultimately, show him that he was wrong to hate bears and that there is more to them than he thinks. The most important part of the film should be the relationship between Kenai and Koda, how they grow to care about and understand one another, despite their differences; however, as I said before, the development of this relationship is lacking, being mostly skipped over through a couple of song montages, as Kenai goes from finding Koda insufferably annoying to suddenly considering him his brother. This shift in perspective is abrupt and doesn’t feel genuine or earned, leaving Koda feeling like more of a prop than an actual character and what is supposedly the film’s most important aspect feeling hollow and incomplete.

The two Moose (Mooses? Meese? I dunno) are fairly unfunny comic relief, they are close to being “The Hooters” of the film, but aren’t quite  annoying or unhelpful enough to really qualify. They aren’t as harmful as they could be and at times Rick Moranis’ delivery can crack a smile, but they are just so disconnected from the other characters and the story; every time they have a scene, it’s just to play goofy dialogue off each other to keep the kids entertained, to put in the trailer and to drag out the running time, their scenes don’t have any connection to the story at large and they barely even interact with the other characters, so they just feel like filler. This is the third Disney film in a row to not really have a real villain, as once again, the “bad guy” is simply a normal person who finds himself in conflict with the heroes and eventually sees the error of his ways. In this case it is Kenai’s brother, Denahi, who finds himself consumed by rage and vengeance after he believes Kenai was killed by a bear and embarks on a quest to kill the bear at any cost, not knowing that the bear he is hunting is actually Kenai himself. To the film’s credit, this is handled very well; Denahi makes only a few appearances after Kenai is transformed, but every time he does, things quickly become very tense, giving him a presence which inspires genuine fear and apprehension in the characters and, to some extent, the audience. His slow descent into rage and hatred is shown nicely by the subtle changes in his animation, as he gradually grows more unkempt and dishevelled, his facial expressions become hard and cold and his eyes dark and brooding. Though by now the idea of an antagonist who is not necessarily a villain is not a novel one and the idea of man as an oblivious monster in the eyes of the animal kingdom has been explored in Bambi and, to a lesser extent, The Fox and the Hound, Brother Bear still does a perfectly fine job of it, this being one the few things it actually does really well. 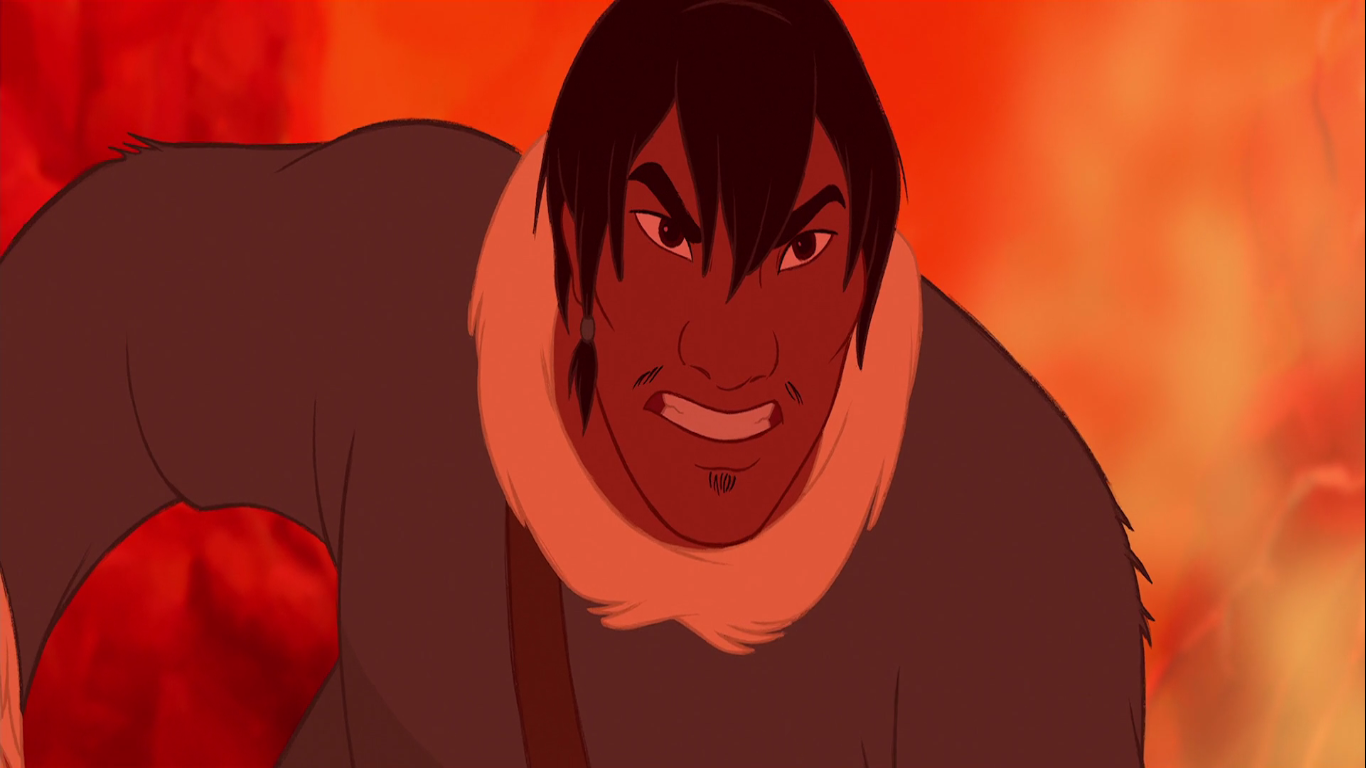 Denahi looks kinda like young Shan-Yu, is this in the same universe as Mulan!?!
Someone call Buzzfeed right now this is breaking news!!!!!!!!!!!

Brother Bear is not a standard musical, as the songs are simply sung over the action to narrate what’s going on and describe the thoughts and feelings of the characters, in the same way as in Tarzan, which is unsurprising, considering Phil Collins wrote most of the songs for this film as well. The opening song, “Great Spirits”, sets the tone, as a laughably goofy and over-the-top number lacking in any sense of atmosphere or subtlety; things are basically the same from then on. “On My Way” is also corny and goofy, very much in the same style as the songs from Tarzan, but also in the same way as those, it’s charming just how silly it is; I know it’s not a very good song, but I like to listen to it anyway. “Welcome” is also lame and silly, but without any of the charm, it’s just pretty bad. Finally, “No Way Out” is similar to “You’ll Be in My Heart” from Tarzan, a slow and overly sentimental song that just pushes the level of corniness too far, even for Phil Collins; though this tone is appropriate for the scene it plays over, the song is so goofy that it draws you out of the moment and does more to take away from the film’s mood than to add to it. This is a small and weak collection of songs, but the musical score is much better and fits the tone and setting of the film perfectly, salvaging a lot of the slower moments in the story by giving you something to listen to, even if there isn’t much to look at.

Brother Bear is an okay movie, forgettable, but nothing all that bad. Stylistically, it's a strong effort, as its colours and backgrounds look gorgeous and the music (if not the actual songs) works in tandem with the visuals to create a powerful sense of setting and life. Unfortunately, it is the main substance where the film falters; its story is unoriginal and flat – when you really think about it, not much happens at all, making it very hard for it to keep you engaged – and the characters are dull and not particularly likeable, with their interactions feeling too brief and unnatural. Despite some impressive visuals and a nice message, Brother Bear is mostly a bit of a bore and certainly not the hit that Disney so greatly needed.

Next Week: Home on the Range!

Posted by Joe Talks About Stuff at 06:57